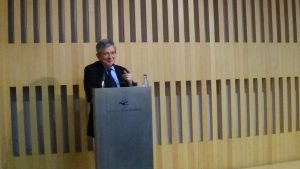 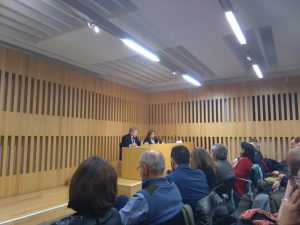 On Thursday 16th February, we were delighted to welcome Mr Enrique Barón Crespo to our Project. Mr Baron has played an important role through the years both for Spain and the European Union. Once he finished his studies, he became a lecturer and an active politician: he was Minister of Transportation, Tourism, and Communications of Spain as well as the President of the European Parliament. He had the opportunity to devote his experience and his ideas to build a more democratic Spain and a stronger Europe.

Under the title The European Leviathan: Monster or Civitas?, Mr Barón, a fierce Europeanist, analyzed the current situation of the European Union and the alternatives for the future. He focused on the history of the integration process, the loss of importance in the international scenario, the causes and development of populist movements across the continent and beyond, and the Brexit process.

Mr Barón, introduced by the director of the EUFICH Jean Monnet Project PhD Mrs Nuria González Rabanal, stated that the European Union needs to go further concerning the integration process with mechanisms such as the foundation of a European Treasury. Only this deep integration can strengthen the Union and dissipate the threats that we are currently facing.

The conference ended with a dynamic debate between the speaker and the attendees (many of them students of the subject European Economy linked to this Jean Monnet Project).